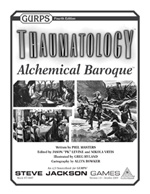 And now - GURPS Thaumatology: Alchemical Baroque is in the shops. Well, the virtual shop.

(Edit: Did I mention that it's a setting where you can play a talking cat?)
Posted by Phil Masters at 4:21 pm No comments:

There is a certain category of old-fashioned stage comedy that is basically King Lear repeated as farce - the foolish old patriarch has to Learn Better before his (generally) loving daughter can claim the romantic independence she has so richly earned, while the villains who've exploited his folly have to be exposed (comically) and thus defeated. Molière's Le Malade Imaginaire is one of these; it's also a satire on the medical profession, from an era when seeing a doctor was probably a risky enough act, even if you were genuinely ill, that such attacks could be fully justified.

This production uses a new translation, by the always likeable Roger McGough, commissioned in the wake of a previous successful Molière translation from his hand. It makes the play into a franglais farce, albeit largely in fractured comic poetry well up to his general standards; still, given the amount of toilet humour (which apparently initially put McGough off attempting this particular play, so I doubt that he's added much) and the need of which he's spoken to work around (or sometimes, in practice, update) all the song-and-dance interludes that were standard in the period, I don't think that he could seriously be accused of lowering the tone much. Anyway, the thing raised a lot of honest laughter from the audience, which ain't bad for a 336-year-old comedy in anything like its original state. My knowledge of Molière is kind of patchy, but I guess his rep may well be well earned.

The production, incidentally, makes good use of a classic and classical single-location set and a highly competent cast. The acting and direction focus on the farcical aspect - I imagine that a different approach could make Argan, the old hypochondriac, into a more pathetic figure - but I don't think that anyone in this audience was complaining.

Posted by Phil Masters at 10:13 am No comments:

Ah, the pleasure of loads relieved. While GURPS Dungeon Fantasy: Summoners is now revised, has been accepted by the line editor, and has passed into a closed playtest, GURPS Thaumatology: Alchemical Baroque (as it will be known) has been edited and laid out, and seems to be well on track to publication in the near future.

Now, what comes next...
Posted by Phil Masters at 8:03 pm No comments:

First, this being a fairly major film at a commercial-chain cinema, there are the trailers for various upcoming SF-ish blockbusters. These always make me feel old and cranky these days, and I assume that anyone with flicker-sensitive epilepsy just no longer goes to the cinema. Even the moderately interesting-looking Surrogates gets flattened down to the level of the rest. After a while, they all run together - explosion, dark corridor, explosion, flickering light giving glimpse of threat, explosion... oh, grow up.

(SF fans are forever whingeing about ignorant mainstream writers who deny that their stories venturing into the topics of time travel or genetic engineering are science fiction. But remember; this is what "science fiction" means these days.)

But after a while, we did get District 9. This has a few explosions and even some flickering lights, especially in the later sections which - as every critic and blogger has noted - shift into conventional action movie shoot-out mode - but the aesthetic is mostly a bit more sophisticated than all that. It's also amazing squalid. For years, SF film-makers have been working on the principle that, if they make their imagined futures a bit shabby and scruffy, they'll look more plausible, but here, things tip right over the edge. District 9, the South African slum where a giant spaceship's load of mostly idiotic aliens has been deposited, is basically an inhabited rubbish dump. The segments taking place in human society gleam by comparison, although they're mostly set in chaotic offices, scruffy burger bars, and fading domestic housing; anyway, they're heavily punctuated with gross incidents drawing on the traditions of body-horror movies.

This shabbiness is part of the film's half-hearted attempt at a verite style; early on, and at times later, it pretends to be a documentary about events in the recent past of its alternative history, including footage originally filmed for a documentary about the company responsible for relocating those aliens from their slum to a camp up country. But that conceit simply doesn't hold; to tell its story, the movie keeps switching to scenes which no one could have filmed, and which don't have the quality of "dramatic reconstruction". It's also been described as a modern treatment of the classic B-movie form, presumably because of some of its themes - alien incursion on Earth, horrific transformation suffered by the protagonist - but this doesn't hold either; actually, the film owes more overall to the modern popcorn-movie form, with its run-and-shoot thriller scenes, extensive use of special effects, extremely rubbery and arbitrary "science", significant convenient plot holes, and use of a totally amoral and high-tech-weapon-obsessed corporation as its primary villain.

But it's definitely a highly eccentric sort of modern SF thriller, pushing itself forward as an indictment of man's inhumanity to prawn while not letting anybody off the hook - almost all of the humans present, of all races and nationalities, are bastards of one stripe or another, and most of the aliens are violent morons. There have been some discomforted debates about the extent to which the movie's refusal to grant any group unambiguous heroic status is really Swiftian satiric savagery, and how much it's just unrestrained prejudice; well, I dunno, but all I can say is that if any Nigerians are really concerned about their nation's image, they can leave this film alone for now and start by doing something about all those scam e-mails oozing out of Lagos. And anyone paying attention at the end will note that one fairly major character who proves something of a hero (and who seems to be facing punishment for it) is in fact black.

Yeah, District 9 is an oddity, probably completely unique, schlepping in devices, themes, and techniques from all over genre movie-making and reality in order to raise questions - and then running away in the ensuing chaos, leaving its surviving victims with a face full of something worrying, unidentified, and just possibly transformative. Not my favourite film of the year, personally, but possibly the most interesting thing we'll see in a twelvemonth.
Posted by Phil Masters at 6:23 pm No comments: 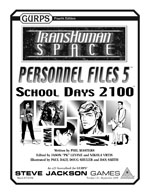 It's still all GURPS news here. To start with, the Dungeon Fantasy work continues to develop: I've just delivered my final draft of Clerics, and I'm currently revising the first draft of Summoners in line with some detailed editorial comments.

Also, the final draft of Alchemical Baroque went in for editing a little while ago. Oh, and School Days 2100, the last of the Transhuman Space: Personnel Files PDFs, has just been published.
Posted by Phil Masters at 1:46 pm No comments: It was a while since we last visited Kew Gardens, and all else aside, we rather wanted to see the Treetop Walkway, so we decided that the end of August Bank Holiday was a good time to make the trip - the end of summer and all that. And yes, it remains a marvellous set of gardens - a place to wander all through a summer afternoon. I've put Angela's photos of the day on Flickr.

The Walkway is impressive, too - an elegant piece of engineering allowing one to take part of one's walk in the park 18 metres up, near the level of the tops of the trees. (Warning to potential visitors; the lift appears to have some kind of long-term problem. Personally, I don't find an 18 metre staircase a problem, though.) Funnily enough, this was one thing that made us consider coming back in late autumn or winter, when the leaves are down; the view it grants is currently of a lot of foliage, with just a glimpse of some buildings (including the Wembley arch). That's nice, but in a few months, it may allow some really impressive views across London. The plantings could be interesting in winter, too.

But Kew Gardens - an admirable scientific institution (currently celebrating its 250th anniversary) does feel obliged to play up the botanical education aspect. Access to the Walkway requires one to walk through an underground display centre with lots of stuff about tree biology, which is fine, but let's face it, is mostly going to be ignored by most of the visitors. It's a three-way science vs. recreation vs. commerce clash, too, when you consider the (fairly classy) gift shops clustered round the main entrances. Oh well, put it down as dynamic tension (which must be hard work).
Posted by Phil Masters at 9:34 am No comments: