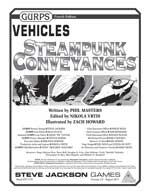 Occasionally, my work leads to something getting published...

GURPS Vehicles: Steampunk Conveyances is now available from Warehouse 23. It's technically the first book in the GURPS Fourth Edition "Vehicles" line, but it's also, of course, the second book in the 4e "Steampunk" line, supporting my past discursions on settings and style with notes and game mechanics for some very steampunk hardware... A remarkable amount of it historical.

(Of course, just because it really existed doesn't make it automatically a good idea. Pre-dreadnought battleships and giant balloons had their little problems, and that "torpedo ram" that gets the one big heroic moment in The War of the Worlds? Only a geek like Wells could think it was a cool idea.)

But there's also some fantastical stuff, some of it courtesy Jules Verne, though I also raided third edition GURPS books along with dubious dime novels. So there y'go; thirty-plus vehicles, covering land, sea, air, and space.

EDITED TO ADD: Roger Bell_West has reviewed the book on his blog.
Posted by Phil Masters at 8:01 pm No comments:

A very brief but somewhat significant note: The Discworld Roleplaying Game is now available for purchase in electronic (PDF) format, for those who no longer like making shelf space.
Posted by Phil Masters at 11:30 pm No comments:

For those keeping score -- the GURPS production process seems to be coming back to life now, as one of my PDF projects heads to production review, and another comes back to me after its first draft has been exhaustively reviewed by the line editor.

I can't say much more than that for now, but it's a start.
Posted by Phil Masters at 11:52 pm No comments:

Despite the 408 pages, some stuff got squeezed out of the Discworld RPG. So I've now made some of that material available online:

Posted by Phil Masters at 3:30 pm No comments:

I guess with all the blogs and stuff there are in the world, I should expect a fair number of non-professional reviews. It's nice, though.

Posted by Phil Masters at 11:18 am No comments:

The Continuing Saga of the Discworld RPG

The book is definitely in UK shops now. There've been reports of limited supply in some outlets - apparently the distributors underestimated demand - but restocks appear to be coming in. So if your shop claims that they can't get hold of the thing, tell them to press their distributor, hard.

More Regarding That Book

A second review of the Discworld RPG is now up at http://www.letthedicefall.com/2017/01/the-discworld-roleplaying-game-review.html.Also, the book will be hitting retail in the UK this week. British gamers who lack a friendly local game store may wish to mail order; I thoroughly recommend Leisure Games for this. See https://leisuregames.com/collections/new-releases-week-commencing-9-january/products/gurps-discworld.
Posted by Phil Masters at 6:48 pm No comments:

The first (gratifyingly positive) review that I've seen of the Discworld Roleplaying Game has now appeared on the Web, at http://justroll3d6.com/discworld-roleplaying-game-review/.
Posted by Phil Masters at 7:46 pm No comments: