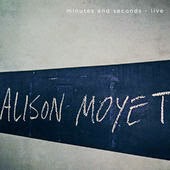 I appear to have acquired a Wikipedia page. Or had one imposed on me, I suppose. Vanity tends to the first. On the other hand, "This biographical article relating to a role-playing game designer is a stub." Well, yes. It's not very complete. Kind of a strange feeling, being a stub.

(If anyone with Wikipedia-editing habits ever wants to expand it, without engaging in the dread Original Research, I can think of a number of places to find out things about me that I've put in the public domain myself. Most of them are only slightly frivolous and not actually untrue, even.)
Posted by Phil Masters at 3:36 pm No comments:

The question has to be - how long did John Allison spend designing this? And how many of those comics would one love to see to exist?
Posted by Phil Masters at 9:27 am 1 comment:

The Sinbad the Sailor book mentioned in the immediately preceding post is now officially on sale - and yes, I've got my paper copies, and they're gorgeous. I guess I should look for my name on Osprey spinners in bookshops. It's available in paper and electronic formats.

By way of gamer-geek celebration, I even created a GURPS treatment of Sinbad.
Posted by Phil Masters at 6:19 pm No comments: 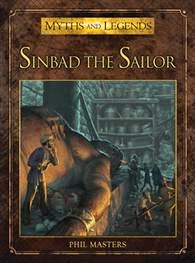 (This is now listed on Osprey's 'Web page as an upcoming book, so I guess that I can talk about it here.)

A little while ago, I received one of those pleasing e-mails (as in, "an offer of paying work") from Osprey Publishing, of "military history with amazingly good art" fame. They have recently expanded into coverage of myths, legends, and other branches of the fantastical, they wanted to do a Sinbad the Sailor book, and somebody had pointed them my way.

To cut the long story short, the book is now scheduled for release in September. I'll leave it to others to comment on my work (in this case, a lot of clarifying paraphrase and some notes on the work of the likes of Tim Severin and Ray Harryhausen), but I will say now that the main illustrations, by ªRu-Mor, are absolutely gorgeous. I'm looking forward to having a paper copy in my hands.
Posted by Phil Masters at 11:47 am No comments:

The NHS and care.data

A matter that may be of interest to UK readers; the NHS may be trying to pull a bit of a fast one, and make the sale or release of personal patient data - not adequately anonymised - to outside organisations look like a patient care arrangement. The name "care.data" seems to be frankly misleading. See http://www.care-data.info/ for more on this, http://brief.care-data.info/ for a shorter version, or https://dl.dropboxusercontent.com/u/14156524/caredata_trifold.pdf for an explanatory leaflet, including a form for those who want to refuse permission for their data to be released.
Posted by Phil Masters at 1:36 pm No comments: 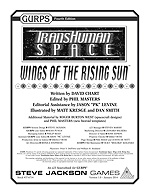 Suddenly, we have a positive plethora of Transhuman Space publications. David Chart's Wings of the Rising Sun (edited by yours truly) is now available from e23.

It represents, I think, a cool extension of the setting. I sold the demo game I ran at conventions using this material as "Transhuman Space meets anime, with a touch of Supermarionation", and I think that I'd stand by that. It also offers the possibility of extended campaigns where the objective is to help people, rather than the RPG-traditional picking of fights. Though you still get to pilot hypersonic ramjets down from orbit.
Posted by Phil Masters at 7:22 pm No comments: