Angela had some time off at the end of last week, so we decided to catch up on a bit of tourist stuff in which we'd be intending to engage down Hampshire way. This developed a bit of a theme. 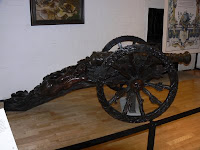 First off was Fort Nelson, which is one of the Palmerston Forts, dating to one of those periods when we (the British) had decided that we didn't trust the French, specifically the 1860s; as we'd also noticed that (a) the Royal Navy was spread a bit thin around our shiny new empire, and (b) naval gunnery was getting a bit long-ranged, these were hastily dug into the countryside around Portsmouth to protect the big Navy base there. They were subsequently abandoned, but Fort Nelson has now been reopened and spruced up a bit to hold the Royal Armouries' artillery collection. Actually, the place has a bit of a feeling of a work in progress; although the (small-ish) gallery of early artillery pieces looks fine (and includes one or two oddities, such as this baroque presentation piece given to the commander of artillery for the Knights of St. John of Malta), much of the fort still looks a bit battered round the edges, and some of the more modern display pieces - including some segments of Saddam Hussein’s "Supergun" (the thing that got its designer, Gerald Bull, assassinated with a rather smaller gun) - are held in a rather plain shed-like building. Still, the tunnels down to the ammunition storage space under the chalk of the hill are very striking, and the place is generally worth a visit for those who might be interested in military engineering. 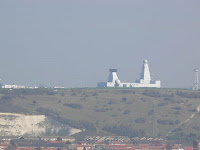 Descending from the hill and looking back, one is reminded that Portsmouth and the area thereabouts is still very much involved in British military history generally. The modern military research station just along the road from Fort Nelson is another illustration, for a start, and the profile of that big phased array radar tower is not only distinctive - it's somewhat amusing for anyone with a taste for certain popular mini-board games. 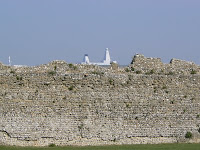 It also looms somewhat above Portchester Castle, which means that this photo covers the range of this history. Portchester Castle itself is a pleasingly intact and pretty impressive medieval structure, which apparently served as a launching-point for a lot of English expeditions during the Hundred Years War, a PoW camp during the Napoleonic Wars, and so on - but then you get up onto the roof level, look down, and are reminded that it's actually tucked in one corner of a complete Roman coastal fort, dating back to the 3rd century AD. Apparently, this is the most intact Roman fortress in Northern Europe, having been vandalised remarkably little over the centuries. (For some reason, the locals scavenged stone from the walls by taking a bit at a time from the inside surfaces, rather than engaging in wholesale demolition. I'd guess that it was still seeing some use for defensive purposes much of the time, which must have helped.) It's a well-kept site, too.

And, lastly, we got to Buckler's Hard, a small village along the coast past Southampton (and not far from the National Motor Museum at Beaulieu) which once held the dockyards where some Royal Navy ships were built in Napoleonic times. Actually, it's more of a hamlet, albeit with a decent museum dedicated to its history and a very wide main street. It was supposed to be bigger when it was first planned, by the second Duke of Montagu, but he was planning to use it as a port for sugar from the estates he'd just supposedly acquired in the West Indies, and he was rather ignoring the fact that the area of the estates in question was in French hands at the time. When the privately-sponsored military expedition which was supposed to deal with that inconvenience, umm, didn't work, the plans for "Montagu Town" fell through. Freelance commercial imperialism; gotta love it...
Posted by Phil Masters at 3:37 pm