Hmm. I seem to have acquired last-minute guest status at Dragonmeet next Saturday...
Posted by Phil Masters at 4:40 pm No comments:

I was significantly distracted from this book a couple of times during the reading of it, from which you may reasonably infer that it isn't apex Pratchett, in my opinion. I finished it, and sometimes I laughed, but this is an author who's set himself stratospheric standards in my eyes. It's a book about football on the Disc, which didn't help to begin with; I'm not a fan, but the real problem may be, I suspect, that nor is Pratchett, much. I really don't have much of a sense for the core imagery of this topic, but I remember enough from my childish phase of petty enthusiasm and the general experience of growing up in the UK to feel that Unseen Academicals

just doesn't catch things quite right. Where Moving Pictures nailed Hollywood perfectly and hilariously, and Soul Music showed us that there is a mythology of rock and roll of which we were barely aware to exploit, this book has a bit of a tin ear.

For example, the story climaxes - naturally - with a football match, but this is cut short, going to a sudden death option for vaguely plausible but not overwhelming reasons. I can see why a writer would do this - drawing a full ninety minutes of back and forth could easily get very boring - but a real footie fan wouldn't have ducked the challenge. (Interestingly, another of our current brilliant genre-loving humorists, Aaron Williams, similarly truncated a soccer match in PS238 #38 - for, I suspect, very similar reasons.) Even within the match, the climactic moments are described in the voice of a journalist who hasn't invented sports writing yet, giving things a deadening distance; compare the breathtaking Tower of Art/giant blonde scene in Moving Pictures.

The point of the book, in terms of the great accumulating Discworld epic, is another step in the Disc in general and Ankh-Morpork in particular's accelerated evolution from medievalism to modernity, manipulated by an increasingly philosophical Patrician but triggered by a vague outburst of divine intervention. Football is the nominal theme here, and it turns out that Ankh-Morpork has a game of that name, but it's still a distinctly medieval street brawl; various protagonists find themselves obliged to transform it into a game of rules and green fields. There's a brilliant natural player to be encouraged, and his born-to-WAG true love to wander through glowing passively, but Pratchett's lack of deep engagement is shown by the number of other sub-plots. In the depths of the increasingly comic-Gormenghastian Unseen University, we find Trevor Likely, the natural player who avoids playing but who has the gift of the gab (and it's to the book's credit that it never actually uses the hugely appropriate pun that his name demands), but also more importantly, Mr Nutt, one of Pratchett's annoyingly omnicompetent plot-moving heroes, who turns out to have more or less literally wandered in from a completely different fantasy universe. Meanwhile, above stairs, the Archchancellor is suffering annoyance caused by the (initially absent) Dean, who has defected to another university. There is also some stuff with a brilliant cook and with the arts of dwarf fashion, into which Miss Born-to-WAG wanders...

And so it goes on. Trevor must deal with his nemesis, one of Pratchett's petty-nasty sociopaths but not a very clever one, two familiar members of the Watch get a half-page each, a couple of old friends from Uberwald wander past in person or passing description, and eventually the book shudders to a halt. There are interesting hints that this book is Pratchett's reflection on the 1980s and their aftermath, as football is transformed from a faintly violent working-class preoccupation to something more acceptable to the bourgeois wizards, and the mess left by a failed Evil Empire must be cleaned up - but my overwhelming sense at the end was of loose ends untied and plot threads forgotten.

Ah, forgotten... The elephant in the room here is Terry Pratchett's famous health issues. Are they affecting his writing, we have to wonder. Well, he can still create crackling dialogue, eye-grabbing metaphors, sympathetic and unsympathetic characters, and some good jokes. But the loose plotting and uncertain handling of theme may be symptoms of a memory that's not what it was. Or perhaps this book just represents an off year. We'll just have to wait and see.
Posted by Phil Masters at 4:58 pm No comments:

Well, it was better than the last one. It had a fairly substantial plot, and an opportunity for some acting (from both the lead and the guest stars), and some decent special effects and some references for the old fans to catch. It even attempted some semi-serious hard SF details in its depiction of the near future, with a Mars station that looked like it might work, built at a date when such a thing might well happen. (The chance of keeping NooHoo's future history anywhere near KlassiKoo's skimpy near-future timeline is of course zero, thanks to the passage of time, and the Time War can be safely assumed to have sent waves of borrowed DC Comics cosmic korflu over history.) The attempts at robust logic didn't last long, mind you; we couldn't really expect any sensible depiction of Martian gravity (not on this budget, kid), but when we were told that there were serious mass constraints on what could be shipped to Mars, it was just plain annoying for the station to have big echoing voids and walls that were allegedly made of six feet of steel. (Err, what? I mean, Mars has radiation issues, but six feet of steel?) Nor did the character logic hold up; we had a first human colony on Mars, which suddenly and inexplicably found another (seemingly) human being on its doorstep, and within minutes horrible catastrophic things started happening, and yet after a token comment, nobody tried to blame or interrogate the impossible stranger...

But that was kind of the point. The Radio Times asked rhetorically if this was the scariest Who ever, but it was really just the most Doctor-Who-scary Who that the writers and director could manage - a very, very stock-classical Who plot, in basic, skimpy form. Station in deep space, the Doctor arrives, bad sh*t goes down (thanks to a monster whose nature remained under-explored, but which manifests as a variant on the modern shambling-zombie stereotype, yawn), the Doctor assists the humans as they're picked off one by one; all this was only padded out to an hour by the Doctor's recognition that he couldn't help this time, because this doomed station represented one of those graven-in-stone historic events, and his struggle with what this might really mean to him, particularly in the still-unshaped context of 21st-century NooHoo mythology.

From the start, NooHoo has spent (too) much time attempting ironic deconstructions of 20th-century KlassiKoo tropes; this episode attempted to escalate that deconstruction into actual classical tragic form, with a flawed hero escalating rapidly to Hubris and a flash of blue light as the Nemesis that strikes down his spirit. But what this really meant was just a script that gave David Tenant an excuse to engage in a lot of acting and some wild shifts of supposed motive, and a setup for the two-episode Christmas Special.

Ah yes, the teasers at the end. NooHoo has previously displayed a superhero-comic-style willingness to drag fan-favourite characters back despite having closed them out with loud assertions that they were gone, gone, sealed off by the laws of the multiverse and gone forever, really. Nobody took that claim seriously with regard to the Master, of course; he's just too coolly complete an antagonist for our hero, and there was a hint or two even at the time. But Donna (and her irritating grandpa)? Oh, come on guys; however skimpy the plot logic of her write-out, can't you stand by the integrity of your own closed-loop tragedy, for once? It's not like you had the unbearable pressure of the teen romance fanwank demand that brought back bloody Rose.

Oh, and at the end of the episode, we had a glimpse of an Ood - yes, the wettest alien race in the history of NooHoo or KlassiKoo (wetter by far than this episode's monsters, ho ho). Jeebus. That, after an episode which had mentioned perhaps the most interesting Who-aliens ever, aliens who haven't reappeared in NooHoo. Couldn't we have, say, a Who-New-Space-Opera exploration of the history of Mars, please? A fudge to explain what a high-tech culture was doing there a mere 10,000 years ago and how the same race came to be part of that multi-species commonwealth in the future, plus a CGI treatment of the freeze guns and cryonic technology?

No, of course we can't. Not this year. That would require a bit of cool-headed seriousness. But next year, the show gets a producer who has shown some capacity for seriousness and a real sense of style (even if it also gets an infant Doctor). So I guess I'm hanging in there, for now.
Posted by Phil Masters at 7:42 pm 2 comments:

This is Not a Review 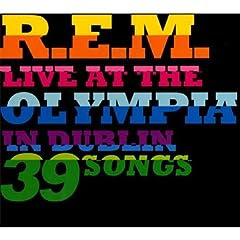 I haven't really followed R.E.M.'s development closely enough to essay a review of Live at the Olympia

. They're not a band about which it feels permissible to attempt even a glib, smart-arse bunch of throwaway comments unless one has trawled studiously through the subtleties of the I.R.S. years and all that; heck, even they seem to avoid talking much about Automatic for the People, which a naive casual fan like me can regard as one of the great albums of the last fifty years or so.

I can say that this collection has some songs I recognise, and some I don't, and of the former, there are some wonderful performances, and some which aren't quite as punchy or enthralling as I've heard elsewhere. And I'll note that R.E.M. are clearly a great live band, who it'd be cool to catch in the flesh some day. But that's elementary stuff.

No, the reason I'm posting is simply a thought inspired by the DVD which came with the deluxe set which I picked up. Specifically; how can a band so alert to the history of rock and roll, and so paranoically diligent about avoiding cliche, include so many scenes where they wander around corridors backstage prior to going on. I mean, have they really not seen Spinal Tap?
Posted by Phil Masters at 7:22 pm 1 comment: