Back in Print (on Demand) 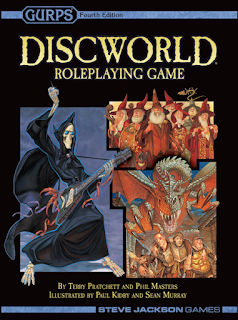 The Discworld Roleplaying Game went out of print a while back, but the thing about modern technology is that "Out of Print" no longer means quite what it used to — at least sometimes. The book is now available through Amazon's Print on Demand service — just follow that link.

(I've not seen a copy of this version; it's paperback, of course, and I'll be interested to see what the quality is like.)

Posted by Phil Masters at 6:15 pm No comments:

Spoilers follow, of course.I walked out of the cinema moderately impressed, but then I often do. I’m a sucker for cinematic techniques, and anyway I’d seen it on IMAX and had just spent two hours being physically assaulted by Hans Zimmer’s score (which is definitely great). But the refrigerator logic hit before I’d even reached the refrigerator.It looked impressive. The sets and scenery were epically vast. It reminded me of that historical theory about the end-state of all civilisations being stasis and architectural giganticism; every building and spaceship was ten times bigger than it needed to be. But then, equally, the movie itself could be taken as an art film which had succumbed to giganticism.And dear god, I wish that Villeneuve could find a lighting cameraman or set designer with the guts to to tell him that murky fog isn’t big and isn’t clever. The murk was appropriate in Arrival, but neither Blade Runner nor this needed so much of it.
And then I was reminded of my personal response to some of the Harry Potter films. I should explain that I’ve never read the Harry Potter books, so I came out of the later movies especially thinking “well, there was clearly a story in there, but blowed if I know what it was” — but the people who went in knowing the story generally enjoyed it. Call me literal-minded, but I feel that an adaptation of a book should be more than a set of illustrations of scenes from that book.
And there was certainly a lot squeezed out from the book. Sometimes that’s necessary, but the blink-and-you’ll-miss-it moment when Thufir Hawat’s eyeballs turn white as he does some mental arithmetic suggest that mentats were supposed to be in there, but had ended up on the cutting room floor. Couldn’t they just have cut half an hour or so of Timothy Chalamet looking slightly angsty? Losing the idea of mentats just turned Hawat into an all-purpose bureaucrat, and also made Yueh’s attempted revenge and Leto’s death scene less interesting and plot-useful — because by killing the Harkonnen mentat, you set up Hawat’s move into his position for the second half of the plot (and grant Yueh some posthumous revenge).(Losing the stuff about Yueh’s psychological conditioning also deprived the Harkonnens of some Evil Schemer points, and makes the Atreides look a bit incompetent in having defences that can be brought down by one undetected traitor. But then, “unbreakable conditioning” that could be broken by the baddies pulling the age old “we have your wife, bwah-hah-hah” tactic never made sense to me, so whatever.)A lot of what felt off to me may be patched in part two. We’ll see. But that would make part two a very different film to part one, so I suspect we’ll mostly get murky fog and Timothy Chalamet looking vaguely angsty. Or maybe there’ll be a five hour director’s cut with all the Herbertian politics back in.
Posted by Phil Masters at 9:19 am No comments:

The latest Steve Jackson Games GURPS Kickstarter project again offers the possibility of acquiring a PDF of my creation -- in this case, GURPS Infinite Worlds: The Osiris Worlds, a brief collection of alternate history settings centered on alternate versions of Ancient Egypt. Actually, it offers the definite possibility of getting twelve GURPS mini-supplements for just $3, if you act in the next few days.