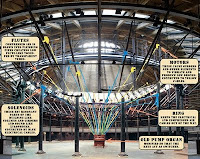 In a certain spirit of seeing what the fuss is about, on Monday the 24th, we made our way to The Roundhouse in Camden to look in on David Byrne's "Playing the Building" installation. For those who haven't heard, this consists of an old pump organ console, gutted and wired up to assorted noise-making arrangements around the (currently largely empty) Roundhouse building - along with a sign on the floor saying "please play". Being British, visitors queue up to tinker with the keyboard for a few minutes each, producing assorted clangs, buzzes, and whistling noises from all around the structure.

If nothing else, it was a fine excuse to appreciate the structure of the building, which is a great old bit of Victorian industrial architecture, re-purposed to good effect in the late 20th century. Byrne's installation turns it into a whistling and clattering void, but it's not so vast or so empty as to be intimidating. The circle of cast-iron pillars supporting the part-glazed roof divide and define the space, and the other visitors - of whom there were plenty when we were there, but not a crowd - create the feeling of an amiable public event.

But if part of the point of this project was the democratization of creativity, well, I think it backfired slightly. Everyone who played with the keyboard - ourselves included - had great fun, but a few places ahead of us in the queue was someone who clearly had a decent grasp of musical technique, and who, with a little thought, turned the installation into a real working instrument. (It wasn't discernibly tuned, but it had at least as much structure as a full drum kit.) This display of deftness and competence earned him a brief round of applause from other people. Apparently, there were evenings when people were invited to bring their own instruments and jam with the building; if whoever nabbed the keyboard at these was skilled enough, the effect may well have been something seriously interesting and pleasing to the ear.

And then, afterwards, we wandered down into Camden, thinking to catch the tube - but, finding a bridge, we realised that we'd come to the Regents Canal, and we could stroll for half a mile along its banks to reach Regents Park. It was a reminder that London is huge, and contains much that merits visiting that I've always missed.
Posted by Phil Masters at 6:49 pm No comments:

Theatre: The Comedy of Errors

Another day, another problem Shakespeare comedy. The problem in this case - the reason why this one doesn't get produced so much (I'd never seen it live before) - being of course that some people aren't sure if it's actually any good. It barely even makes it to the dictionary of quotations, after all. But the company from Shakespeare's Globe have not only tackled it; they've taken it on tour, in an authentic-practices sort of approach with a booth stage (a rectangular canvas box forming the back of the small, low temporary stage) and a cut-back cast engaging in much doubling up - albeit with costumes that mix modern dress and vaguely period-eastern-Mediterranean style (to go with some Arabic-style clarinet-based music, hookah pipes, and so on).

And hey, they had me convinced by the end that this early Shakespeare piece is worth seeing occasionally. It may be a farce that's labeled as a Comedy, but it turns out that Shakespeare could orchestrate a pretty decent farce when he wanted to (okay, borrowing hard from three different Latin sources); it's not Feydeau - a lot depends on someone who's spent several years searching for his long-lost twin brother not having the faintest idea why a town full of people might be mistaking him for someone else - but it raises quite a few laughs and has at least a touch of poignancy.

Not that this production tried too hard for the last, after an affecting opening scene. The doubling up included several major parts and both the pairs of twins who are central to the plot, which worked perfectly well until the climax, when they're finally supposed to be on stage together - and so the final scene saw life-sized cardboard cut-outs of two of the cast wheeled on to act as place-holders, while another actor, doubling the Duke and Angelo, spent a lot of time switching postures while talking to himself. The cast were slick enough to make this very funny, but it couldn't rise above the level of mock-amateur slapstick. Still, think of a touring Elizabethan theatre company, playing something originally written to entertain a bunch of drunken lawyers to a random audience of unlettered provincials, working with the resources they had available, and this was probably about right.

Mind you, on those terms, playing it in a University garden isn't strictly right - apparently, the University banned theatre companies. But on a nice day, with a picnic blanket and a production that was clever enough to make itself look convincingly rough-and-ready, who cares?

And we finally got to catch a Cambridge Shakespeare Festival production this year, a week before the thing wound down. In Robinson College Gardens, too, which we hadn't seen properly before, and which turn out to be very nice for this sort of thing. And the weather, we earlier in the day, turned nice for the evening, if a little cool by the end...

Okay, the play. One of Shakespeare's more problematic numbers, of course, being technically a comedy but really not funny - this production did its best with the bawdy house inhabitants and other minor parts, but even that wound up being more about the flaws in humanity than about actual humour. The play ends in marriage or marriages, yes, but these are marriages as punishment. (Mind you, I do wonder if the thing worked for Elizabethan English audiences as a huge joke about Catholicism and Catholics, with their wacky un-English obsessions with sin and virginity and confession and absolution and all that. Is the Duke even a Catholic god, or at least a symbol of the Catholic church, all manipulative power and arbitrary forgiveness when it suits him?) It's a tough play to produce by Shakespeare's standards, but interesting.

I guess that the normal response these days is to see it as a story about tyranny and power, with the Duke as an arbitrary manipulator and his brother as a Puritan tyrant. This production, though, took a different line, treating the Duke as a hell of a lot less clever than he thought he was; he fumbled around attempting unsuccessful jokes and unwise tests of other people's attitudes, causing widespread unnecessary pain and really not understanding why Isabella gave him such a dirty look at the end when he tried to propose marriage to her. Angelo, meanwhile, just lacked self-knowledge, hurtling into his appalling behaviour because he didn't have a clue how people worked. Let's face it, this is a horrifically dysfunctional sort of family to have running your country on any terms; in this version, they were downright clueless. Vienna, one felt, was in as much trouble in the long term as in the short.

Technically, this was a punchy presentation, coming it at around two hours including an interval, and even losing one or two of Lucio's sharper lines that often grab the audience's sympathy. This Lucio was shaved bald and wearing white face-paint that made him look part clown, part syphilis victim, and part goblin; definitely one of the bawdy house crew, not a fallible but morally honest everyman. The quasi-comic bawdy house business also involved a leather-aproned, bare-buttocked executioner (just a small part on a cold evening, boom boom), a lot of shouting, and some weird free jazz noises from offstage that didn't help the clarity of the performance. Still, it was Shakespeare on a summer evening, as the shadows drew in and things became colder; Measure for Measure had the way of things all too well.
Posted by Phil Masters at 10:56 am No comments:

Posted by Phil Masters at 11:12 am No comments: