I confess I hadn't been following any news or reviews before I went off to this gig, so I came to things quite fresh. To start with, I was interested to see what sort of backing band Alison Moyet would bring with her. This is, after all, a woman who moved from '80s pop to jazz standards, a stint on a musical, and even things like Purcell operatic arias (with a voice that can work with all this), trailing a range of backing musicians to suit. Well, come the time, on came ... a couple of synthesiser players, looking worryingly like the guys who come on when Bill Bailey is doing a Kraftwerk parody. Yes, the former lead singer of Yazoo had decided to revert to electronica for this tour. 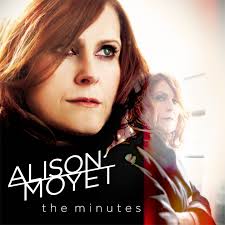 And very good they were too, actually. The two guys were actually multi-instrumentalists (and one also acted as a backing singer, often I'm pretty sure singing higher than Moyet herself), and the set was built round a really good mix of tracks from Moyet's latest album, The Minutes, and from her back catalogue. From deep in that catalogue, in fact, as she commented when pointing out that at least one of these songs was written when she was 16. I can quite believe that the lyrics of "Nobody's Diary" came from a bright, passionate teenager; if she also created that small gem of a synthesiser riff back then, she really was a prodigy.

(Alison Moyet herself was looking damn good, by the way. Apparently, she's been saying in interviews that she thinks she may have overdone the weight loss a bit, and nobody could blame her if she put a couple of pounds back on. But she sure as hell doesn't look unhealthy in a black blouse and jeans. Definitely an inspiration to her generation.)

She announced that she had been rearranging the old songs, not wanting to act as a human jukebox; some of the rearrangements were more dramatic than others - notably slowing down "Is This Love?" to a wilful extreme, and setting "Only You" (a song whose innate melancholy is a bit at odds with its poppy jauntiness) in a minor key. In general, everything worked great, and I got the impression that Moyet herself was enjoying the process. Which probably makes this the best way to handle assembling a set of songs from across a thirty-year career. Oh, and you can dance to a lot of them, too, as was probably sort of the point of putting a straightforward rendition of "Don't Go" at the end of the encores. If some of the newer songs had fewer catchy hooks than some of the early numbers, building instead on a foundation of crunching rhythm guitar, they still worked in their own way, sounding like theme tunes for a James Bond movie if Bond went a little bit gothic.

Moyet gave "Filigree", one of the key tracks from The Minutes (and a song which is loaded with gorgeous hooks), a long introduction in which she explained it was about the experience of realising that the trick is to wait for the moments when everything comes together. I think that this gig demonstrated that for me. I just hope that we might get a live album from this tour.

Posted by Phil Masters at 12:30 pm No comments: