The Orange and the Red

One snag with being a bit averse to overly hot weather - by UK standards - and thus prone to taking holidays in places that are climatically temperate, is that quite a lot of stuff that one really doesn't want to miss in a lifetime is draped around the Mediterranean.So, this year, we decided to try a workaround; taking a short break to points south in a cool month. Pictures are going up a few at a time over at my Flickr pages; consider this to be the supporting notes. 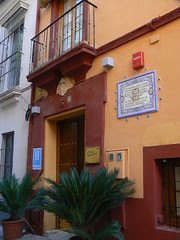 This being Spain, we had no difficulty finding a dinner quite late in the evening, albeit a snack-ish - sorry, tapas - sort of dinner, in a little nearby bar-restaurant that the guidebook suggested. And we slept okay despite a local church bell that seems to keep going on the hour and half-hour all night. 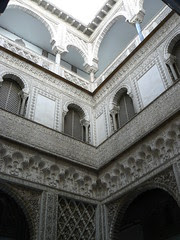 Monday: We'd only booked for a day and a bit in Seville, and examination of that guidebook suggested that the Real Alcazar was the number one priority. So we made our way down the maze of twisty little passages, all alike, that counts as a street plan in those parts (people drive in this place? aargh), passed the fancy city hall and the gigantic Gothic cathedral (complete with repurposed minaret as its bell-tower), and joined the short queue... 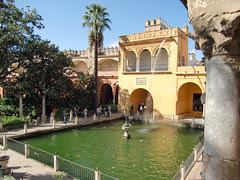 A few hours later, we staggered out in a state of mild aesthetic overload. I mean, I've heard of the idea of a building as a work of art in its own right - but I'd never actually experienced anything quite like this. Touring he entire palace complex (and attached gardens) is like being on the inside of a giant, exquisite jewel box, a Moorish-Spanish masterpiece of screens and arches and pools and tiles. It's a work of abstract art, mind you, with the Moorish influence ensuring that there was very little representational going on, but utterly breathtaking as an exercise in pure form. This decorative style ensured that moving from the carved or moulded interiors to the palm-filled gardens felt utterly natural, too. The realisation that history was made here - that Columbus and the colonial projects that followed him were sent from these interlocking chambers - was, well, not exactly icing on the cake, because this is one well-iced cake already. 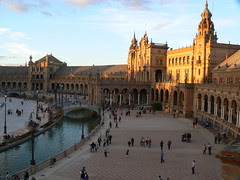 After that, a stroll round the city seemed in order. We basically started in the Jardines de Murillo and struck north, past that cathedral and some other central sights and eventually crossing the River Guadalquivir and getting into the old ceramic-makers' district. (And with all the tiles around this city, it was clear that this was an important district in its time.) Then we headed back southwards, eventually re-crossing the river to pass the old Royal Tobacco Factory (thank you, Merimee and Bizet) and reach the Parque Maria Luisa. We had time for a quick look at the park and the huge Plaza de Espana (left over from the great Exposition of 1929) before dusk began to encroach, and we headed back to the hotel.

Oh, and after steering round a late-night religious procession, complete with band (just to confirm that we were in Spain, I guess), we had dinner in El Rinconcillo, which is supposed to be the oldest restaurant in the city, dating back to 1670. Decent southern Spanish stuff, I'd say. The restaurant apparently sometimes claims to be where tapas was invented, but I'd imagine a lot of Ancient Roman popina-keepers raising an eyebrow about that. 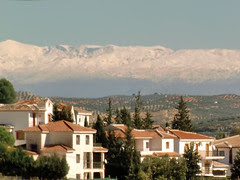 Tuesday: Our train was at 11:50, so we had time for another quick look around Seville, with another look at the exteriors of some buildings we'd missed the day before - then we were off to the railway station.Judging by the two we caught on this trip, Spanish trains are fine, albeit a bit basic and with little in the way of on-board catering, so we spent three hours rolling across an increasingly rugose Mediterranean countryside of olive groves and the odd cactus, and reached Granada by early afternoon. Then we spent rather too long trying to track down our hotel - we really should have downloaded better maps before we set out - before we found ourselves next to a taxi rank, and resorted to just getting into a cab and asking to be taken there. The Hotel Guadalupe proved not to be quite as cool as the Casa del Maestro, being rather more of a stock tourist place - but then, it was significantly cheaper, we got a positively cavernous room, and the place was more or less right outside the entrance to the Alhambra. Not that we were going in there that day; rather, we strolled down and round the hill to look around the Albaicin, Granada's old town. "Picturesque" is the keyword there. 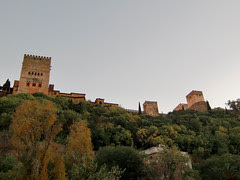 Dinner, in Ruta del Azafran in the Albaicin, should have been good. Traditional southern Spanish dishes with a modern twist, in a stylish restaurant with views of the floodlit walls of the Alhambra. Furthermore, the execution was highly competent. Okay, my Remojón Granadino was maybe in the "try it once for the interest" category - a salad of potatoes, olives, and salt code is fine, if a bit bland here, but adding orange just seems perverse, even if it is "traditional" - but it was no more than the menu promised, and it was by no means unpleasant.

However, at some point during our three-quarter-hour wait for my dessert (a rather nice dark chocolate cake, not too sweet, accompanied by a matching custard that I'm happy to believe was actually Cava zabaglione like the menu said), long after the dessert wine had arrived and been consumed, I began to notice too much about the place. The atonal avant-garde music on the hi-fi, for a start. Then I went to the loos, which were labelled "boys" and "girls" on the door in multiple languages... Yeah, two unisex cubicles, except that the lights in one were gone and nobody was doing anything about it. On the way back to the table, I managed to suppress my invisibility-to-waiters field for long enough to prompt ours, much to his surprise, which is probably why the cake arrived before midnight. When we subsequently got the bill out of a different (but equally black-clad) waiter, it didn't include the dessert, which I chose to take as an apology- but it did include a couple of Euros for the two bread rolls which had arrived at the table automatically, as if free...

I'm prepared to believe that what we had here was a highly competent kitchen being let down by a front-of-house organisation so far up itself that those waiters only see daylight when they yawn. But then, I dunno who cocked up the dessert order (though I know who neglected to say anything to us about it). We only left a token tip, which was probably a mistake; none at all would have felt justified. 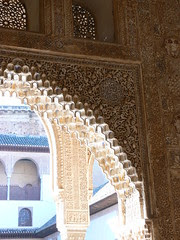 Wednesday: There's one reason to come to Granada, really, and our hotel was just yards away from the entrance. The Alhambra has a reputation as another building-as-artistic-masterpiece, and that's fully justfied - but primarily by two specific parts of the hilltop complex. Our timed entrance tickets for the Nasrid Palaces were for late enough in the morning that we had time to stroll through some of the grounds, pass through the Puerta del Vino, and visit the Alcazaba - the medieval castle at the tip of the hilltop complex, with magnificent views over the city and across to the mountains,

And then there was that Palace. Yup, it lives up to the hype. Well, the standard tourist route takes you through some merely impressive rooms first - then it hits you with the Court of the Myrtles, which is one of those justifies-the-trip things. The only snag with our timing was that the Court of the Lions is being massively refurbished, so we found the lions themselves in a side-room, showing off the radical clean-up that they've received, while the Court itself had a lot of scaffolding. (Made me feel like I was back in Cambridge...) Maybe we go back in a few years when they've got that little architectural gem back in full working order; even in its current state, the small forest of slender arches and carved screens still hints at the genius of the thing.

Anyway, after a stroll round the apartments where Washington Irving stayed, and the chance to admire the views and all, we wandered out into the merely superb remains of the Partal Palace, before making an indirect way to the other unique architectural masterpiece - the Generalife. (This is in the guidebooks as a separate site, but actually it's all part of the Alhambra deal.) Angela notes that you can't open a book on garden history without finding pictures of this, and it's really not hard to see why. It's kind of an exercise in gratuitously elegant Islamic garden design. With fountains. Twice. With extra beautiful stuff around it. 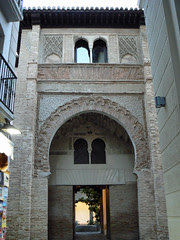 Having perhaps become a little Alhambra'd out, we headed down the hill again for a quick look round some other historic buildings in the main part of Granada, including the exterior of the cathedral, and the Corral del Carbon, a building that - despite being in current commercial use - is recognisably a medieval, Moorish-era caravanserai. Then we wandered back through the Albaicin and up to the Mirador de San Nicolas, a small square with the best views in the city - across to the Alhambra and down on the city, all with the mountains as a backdrop. It understandably seems to have become an evening hang-out for tourists and students.

Dinner that night was a simpler choice in a little bar-restaurant, including crepes and sherry. 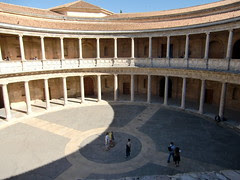 Thursday: First priority this day was to find a shop where we could pick up a new suitcase, one of ours having lost a handle in transit, and then we decided that there was only one thing to do with this last day of sightseeing; we went back into the Alhambra. We aimed to focus on the stuff we'd missed of skimmed the day before, and succeeded, taking in not only the Palacio de Carlos V (a striking Renaissance palace dropped into the middle of the older site, with a great circular court in the centre - something that would be a significant place to visit in most cities, but here ends up looking like a discrepant afterthought), but also the Museum of Fine Arts which it houses, and which is currently hosting an exhibition of Matisse's work (on the reasonable excuse that he once visited the Alhambra and was inspired thereby). Oh, and some other lesser buildings, and more gardens.

And for dinner, we decided to treat ourselves to the restaurant at the Parador de Granada, the very swish hotel within the grounds of the Alhambra. This, I'd recommend; a high-end meal with some local touches. Okay, the amuse-bouche consisting of a tiny segment of Spanish omelette was probably trying too hard, but the chilled almond and garlic soup and the roast kid were great. Angela spoke well of her tuna, too. 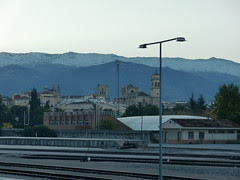 Friday: The railway and airline timetables not being too full of options, we had a fairly early start (too early for the hotel's breakfast service - hey, it's Spain, they don't believe in 7am), and spent the morning descending once more into the plains of Andalucia. Then, it was a bus to Seville airport, lunch there, the flight, and a coach from Heathrow through the English rain. Hey ho, home again. At least with weather like that, we didn't regret missing any firework displays.
Posted by Phil Masters at 7:19 pm 1 comment: