Concert: Marina and the Diamonds

I've been to a handful of rock and pop concerts this year (and yeah, I've neglected to blog about them), and one thing that's become obvious is that high-quality, presumably back-projected video screens have now become financially entirely accessible to, well, a lot of the sort of bands who play the Corn Exchange. Marina and the Diamonds are using theirs to show some pretty good pop-art-flavoured visuals during their current tour, but I suspect that the system isn't entirely bug-free, and may have been the cause of the dread Technical Difficulties which generated about an hour's delay between the support act (who didn't make much of an impression on me; I think they could do with something to fill the sonic space between the thud of bass and drums and the ping of synthesisers and falsetto of the singer) and the main event. At least, the screens once or twice displayed giant Windows menu bars in that time, which I take as a sign of glitches. Add in a notable amount of time spent queueing outside before the doors opened, and, well, things ran a bit late. Then, it turned out that the lighting designer had decided to silhouette Marina herself with a full-strength white spot, angled up from behind her, for some songs. Which would be fine if it hadn't meant everyone in the balcony going "Aaargh" and shielding their eyes...

All of which techie wobbliness was rather unfortunate, because it was actually rather a good gig. Marina Diamandis combines a genuine talent for writing good old-fashioned catchy choruses with a certain amount of stage presence and charisma. This in turn meant that, although she had assembled a highly competent band for this tour, she genuinely didn't need to hire any backing singers; when she wanted vocal filling, all she had to do was point her microphone at the standing audience down at the front and tell them to supply it. (Diamandis does say that the "Diamonds" are her fans, after all...) This approach did leave her slightly more restrained and introspective songs, such as the rather cool "Immortal", looking a little out of place, but overall this was an effective pop-as-in-popular performance. Diamandis manages to be a plausible feminist while wearing three different glittery costumes, one including cute mouse ears, in a ninety minute show, too.

It has to be said that Diamandis's songs aren't as clever as they maybe think they are; the message in the likes of "Savages" is hardly subtle. But then, it's pop music, and its heart is absolutely in the right place. Worth a little waiting and some being dazzled.
Posted by Phil Masters at 11:29 pm No comments:

Hmm, I didn't follow up the previous post. Well, The Wars of Atlantis did appear (and still looks nice). But anyway, the other significant thing is the appearance of Transhuman Space: Bio-Tech 2100, my latest TS product, as a PDF from Warehouse 23 - an extended analysis of the place of biotechnology in the world of 2100, in both historical and game-mechanioal terms. Other stuff is still waiting. Print buying can evidently be a big job these days.
Posted by Phil Masters at 11:07 pm No comments:

Just in case anyone was wondering, yes, my writing projects continue.

Posted by Phil Masters at 10:47 am No comments:

By way of a small footnote to the immediately previous entry; a few printed copies of The Small Folk are now available from Leisure Games; see their online catalogue here. In addition, a few more should be available from the Modiphius Entertainment stand at UK Games Expo next weekend.
Posted by Phil Masters at 10:59 pm No comments:

The wait is over; The Small Folk is out.

What's it about? Well, here's the blurb:

The Small Folk have been lurking on the margins of human society since before the dawn of history, but we humans don't tend to notice them. They're really good at hiding from us. They're also good at arguing, picking fights, sulking, and splitting up into cliques. But they're tough, clever (on their good days), and armed with an array of startling magical powers.

The Small Folk is a game of wainscot urban fantasy, built round the popular FATE rules engine. Take your pick of seven different cliques, from aggressive goblins to oh-so-superior brownies and technophile gremlins (or the cliqueless, because some people just have to be different), and an array of skills and magical powers, personalise your character with aspects and stunts, and get out there and get underfoot.

Oh, and watch out for cats, rats, hawks, mousetraps, and your neighbours.


Ten years or so ago, I wrote a chapter for Guardians of Order's Dreaming Cities, an urban fantasy sourcebook for their Tri-Stat system. It was quite well reviewed, and some people seemed especially to like my chapter. Then GoO went broke, and the rights to the chapter reverted to me.

Over the next few years, I dabbled with various ideas about what to do with this material, and I eventually plumped for self-publishing. So I looked around for an Open Gaming License rule set to use for this purpose, and plumped for Fate, and specifically the "Free FATE" variant. After I'd plugged the system and rules together, filled and sanded the joints, and applied a layer of varnish (with the aid of some very useful peer review), I had a 116-page book which I could sell as a PDF with a reasonably clear conscience.

Then, well, stuff intervened for a while. But in due course, I commissioned Steve Stiv to do me a cover (and got a little bit of really good interior art out of the deal as well, because Steve is a great guy), and sorted out a business arrangement with Warehouse 23, and now, here it is. Yours for $11.99.


For Those Who Prefer Paper

Although this is basically an electronic publication, just as an experiment, I had a few copies printed off by Lulu,  and I've now sold some of those on to Leisure Games. So they should be available from there soon, if not already.

Posted by Phil Masters at 9:15 am No comments: 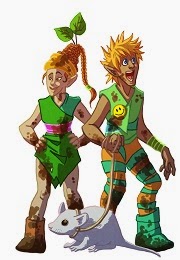 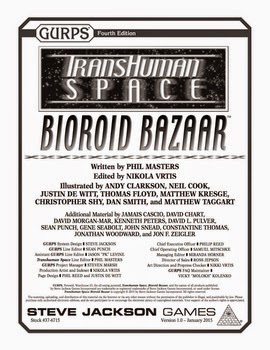 2015 begins well, with my new Transhuman Space product seeing publication: Bioroid Bazaar. Excuse me while I quote from the official blurb:

Transhuman Space: Bioroid Bazaar completes the job started in Transhuman Space: Changing Times of updating relevant game templates from earlier Transhuman Space supplements to GURPS Fourth Edition, this time covering the setting's genetic marvels and half-human monstrosities. It also gathers a couple of Fourth Edition templates from other supplements, and features a few new designs, including the disturbing Leonardo and Bingmayong bioroids and the tragic J7-S53 "upgrade." ...
Posted by Phil Masters at 8:01 pm No comments: