Generic criticism; "science fantasy" is a bastard genre that lacks any inherent discipline. If anything is possible, nothing means anything.

Oh, okay, the Christmas Special wasn't that bad. It was done with a certain amount of panache, and it had its moments. It was also interesting as perhaps the first Who Christmas Special that really tried to be about Christmas in some significant way - although I imagine that all the stuff about midwinter festivals may make it a hard sell in Southern Hemisphere markets.

But the structure was all over the shop. The snag with the 21st century Doctor-as-demigod pattern is that it's hard to present him with a truly worrying challenge, and this story got wildly arbitrary in the attempt to get around that. When your magic-wand-sorry-sonic-screwdriver can do anything to any machine, having it not work on some not-very-wizzy-looking contraption is just unconvincing. When your hero's vehicle has towed whole planets around, being unable to rescue one modest-looking spaceship which is crashing very slowly just looks incompetent. And when you're running round history as a plot convenience, having a heroine suffer from a 19th-century-opera terminal disease - one that gives her one day to live but no visible symptoms - is going to look plain goofy to even the eight-year-olds watching. Maybe it is incurable, in all of time and space, but somebody ought to think to try.

Which reminds me, general hint to TV writers; virtually everyone knows how long the programme they're watching will run for. Therefore, having someone announce that your hero has got "just under an hour" to solve a problem at the start of the episode slices suspension of disbelief into tiny bleeding ribbons. See Nick Lowe's The Well-Tempered Plot Device for further discussion.

Also on the matter of time; it's been observed before, by smarter people than me, that Steven Moffat really loves plots that play games with time and causality. Sometimes, this has produced very good stories (starting back with Coupling). But putting him in charge of a series about a guy with a time machine may be too much like putting a child in charge of a sweetshop. Sending the Doctor up and down someone's personal timeline is the kind of time-meddling that Doctor Who has customarily avoided - and allowing people to meet older and younger versions of themselves is usually, canonically, treated as a bad thing. This thing about time is beginning to look like Moffat's hubris.

(Also, I guess having the special effects shark spring forward with jaws agape may just have been a conscious reference to Back to the Future 2, but if so, it was tempting fate. Who FX aren't so good these days that you can afford to remind people of famous lines about crap special effects.)

But regarding science fantasy... The defence of such things, when they're compared to science fiction, is that (like most competent fantasy) they invoke poetic and emotional truths rather than brute rationalism. Well, maybe. But aside from the fact that, when you're deploying the rationalist paraphernalia of science fiction, this is in danger of looking like mawkish tosh, the fact is that you have to make the poetic truths convincing. Chucking in a lot of carol singing and a carriage pulled by a flying shark doesn't cut it.

In other words; Bah, humbug.

(The trailer for next year's episodes after the credits looked moderately amusing, by the way, with no daleks or cybermen even. But I did glimpse a bloody ood. Unless we're going to get a story in which an arch-villain intervenes in their evolutionary history to transform them into the most stupid race in the history of biology, I shall be very cross.)
Posted by Phil Masters at 12:00 pm 2 comments: 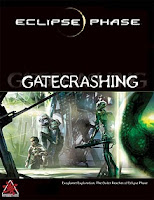 Well, one more thing I worked on has made it out the door in 2010 (in electronic form, anyway); Gatecrashing, for Eclipse Phase, has ten or fifteen thousand words of mine in there somewhere.

The hardcopy version should come later, but right now, the PDF is on DriveThruRPG.com. You can buy the book alone, or the "hack pack" which includes some extra stuff.
Posted by Phil Masters at 9:27 am 2 comments:

Just a note - I've finally finished sorting through our photos from last month's trip to Spain and putting the interesting ones up on my Flickr Account.
Posted by Phil Masters at 1:41 pm No comments: