Views from a Busy Day

The 19th of October this year was, I see in retrospect, a busy day for us.

As previously noted, we started at my brother's place, and after a run up Lawrence Hargrave Drive and onwards, we arrived in Sydney, dropped off the hire car, and found our way to our hotel - which was located on the harbour, in fact in a converted warehouse on the quayside below the south end of the Sydney Harbour Bridge. (Good location!)

That put us at the north end of the Sydney Royal Botanic Gardens, so we walked down through those in the late afternoon, taking in flora, fauna, and statuary. A kind of high point was seeing fruit bats roosting in one set of trees, even if the gardens seem to regard them as a borderline pest...

Then we headed back up through the city, past assorted historic buildings, and back to the hotel, before heading out for dinner in an open-air oyster restaurant on Circular Quay.

Okay, it was basically a day sightseeing. But you'll notice we ended up with a lot of pictures.
Posted by Phil Masters at 7:43 pm 1 comment:

I've now put up a batch more photos from our October holiday up on Flickr, this time covering the 15th-19th of October. On the 15th of the month, we arrived by train in Sydney, picked up a hire car, and went to visit my brother

David and his wife Shirley south of the city, in the area which turned out to be describable as the Illawarra/Wollongong region. The next day, Dave and Shirley showed us around some of the local sights, and we caught up with their family.

The serious sightseeing started on the 17th, when Dave and Shirley contrived to show us some serious views in the Southern Highlands. We took in the Illawarra Fly, an amazing treetop walkway with views across the forest and the coastal plains to the coast, the stunning scenery at Fitzroy Falls, where a river has carved a canyon out of the edge of the highland plateau, and yet more views at Cambewarra Lookout, where what looks like a pleasant rural tearoom garden (okay, with palm trees) suddenly plunges over the side of a mountain, with a view across to the Pacific. To wrap up, we went down to that ocean, specifically for a short visit to Seven Mile Beach.

Then, on the 18th, we got back down to the coast again, pausing in Shellharbour (and photographing some pelicans) and then looking round Bass Point, which is basically an attractive sea-shore park (with protected nurse sharks off shore, apparently), and a war grave/memorial. Then, after a pause to take in the Kingsford Smith Monument and the view down the coast at Gerroa, we had an excellent lunch at Coolangatta Winery. On the way back, we saw Blowhole Point at Kiama, and especially the blowhole itself - a striking natural formation where the sea drives in through a covered channel eroded in the rocks, then erupts upwards (though the day was calm enough that we didn't get soaked by it). We got pictures of that and of the helicopter that came past overhead, but unfortunately the whale that was swimming past that day was visible only at a considerable distance.

Finally, on the 19th, we were scheduled to head back to Sydney, so we drove up the coast a ways in convoy with Dave and Shirley. This took us over the striking Sea Cliff Bridge, up onto Bald Hill (scene of Australia's earliest aviation experiments, courtesy of Lawrence Hargrave), further up for a stop at Governor Game Lookout, and then into the Royal National Park, where we said our goodbyes at the Hacking River.

And then we drove onto Sydney. It had been a great few days with a lot more striking sights than we'd perhaps expected; the scenery in that part of the world turns out to be stunning. But there was more to come.
Posted by Phil Masters at 4:58 pm No comments: 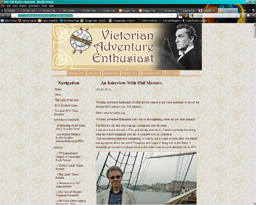 If anyone is actually digging round here out of interest in me - Victorian Adventure Enthusiast have just run an interview with me.
Posted by Phil Masters at 11:40 am 1 comment:

Posting this a month or so late, but what the heck.

To start with, a boast. I first saw Magazine in (I think) 1978 at a gig in a university hall, and then again in 1979 at the Corn Exchange. So, having made it to their gig at The Junction, I think I must have seen them every time they've played Cambridge.

Actually, the '79 gig was one of Angela's and my first dates, so we weren't going to miss this one. But first, we got hold of No Thyself, their first new recording as a band for thirty years. I'm not sure if anything on this is quite up to their best work c.1980, but it's definitely real Magazine, recalling, say, the menacing pulse of "The Light Pours Out of Me" in "The Burden of a Song", and the deliberate four-letter shock effects of "Permafrost" (only more so) in "Other Thematic Material". The pushing-for-accusations-of-bad-taste lyric of "Hello Mister Curtis (with apologies)" might almost count as something new, except in that it fits with Howard Devoto's general, habitual post of punky irony. (Though that his disdain clearly extends to punk: "No decadence, no cheap thrills of hate from me...") Some of the songs could probably grow on me quite a lot, in fact; they may look like conscious recreations of the band's old style, but in the worst case, that's a fine model to emulate.

(I was amused when some critics detected a new maturity in "Of Course Howard", incidentally, given that I recognised some of the lyrics from the introduction to a collection of other Magazine lyrics published thirty years ago. Actually, the song seems to represent a dialogue between Devoto today and his younger self, which is interesting in itself.)

But anyway... For those who don't know them, Magazine were a group who evolved out of the punk scene when lead singer Howard Devoto decided to do something a bit unashamedly smarter, then vanished when Devoto apparently just got bored of the whole business, leaving a legacy that took the rock world decades to acknowledge. Unfortunately, since 1981, John McGeoch, the band's authentic post-punk guitar hero, has died. Also, when they reformed in 2009, Barry Adamson, their bass player and other most strikingly capable musician, rejoined, but he's since evidently decided that his career in film music and so forth means more to him, and walked away. The replacements, Devoto's occasional collaborator Noko on guitar and "Stan" on bass, are entirely capable of emulating the originals' playing well enough, but whether they can emulate the original synergistic, innovative brilliance is another matter.

Not that the audience at this gig were too worried (and I speak as one of them, believe me). We may not have had associations with the two guys on his left and right, but that was Howard Devoto in the middle. Okay, a lot of us were clearly there to be reminded of our youth. I haven't seen this many grey hairs and this much male-pattern baldness since ... um ...the last folk gig I was at. And I guess that Devoto, who's gone from "high forehead" to "bald" in thirty years, could feel entirely at home in this company. But enough tacky irony. That's Howard's job.

The set consisted of a mixture of old and new songs, in pretty conventional rock gig style, really, not that I'm complaining. It even used staging tricks I remember from thirty years ago, notably hitting the audience full in the face with white spotlights behind the band for "The Light Pours Out of Me". Among the new songs, "Hello Mister Curtis" was dedicated, a little strangely, to Terry Pratchett; I assume that the point there is that the song is about facing up to mortality, though whether its pose is one of acceptance or defiance - whether the lyrics are addressed to Ian Curtis and Kurt Cobain in tones of wry admiration or contemptuous sarcasm - seems unclear. Clarity has never been the point with Magazine, mind; during the first song, Devoto was at one point wandering around the stage with a placard say "You Do The Meaning".

And we will, Howard, we will. Whether we were here for abrasive surrealism, or wry and twisted humour, or to be reminded of our student days, or just because we know the band will rip into that guitar riff in the encore of the monumental classic "Shot By Both Sides", we all likely went away satisfied.

The support, incidentally, were In Fear of Olive, whose country-tinged rock was competent enough, but seemed on this brief exposure to lack sufficiently memorable tunes, aside from the fact that they really didn't look to have much in common with Magazine. But the support act in '79 was Simple Minds, and I didn't think very much of them, so what do I know?
Posted by Phil Masters at 6:06 pm No comments:

I've now finished posting the set of photos covering our trip on the Indian-Pacific railway, which involved leaving Perth on the 12th of October, with a brief and under-lit visit to Kalgoorlie that evening. Kalgoorlie being a mining town where the main sights on a coach tour are a giant hole in the ground (sadly under-lit while we were there - apparently they'd had a minor landslip, so the usual round-the-clock work was cut back) and the red light district.

On the 13th, we passed a full-scale airport with a staffing level in single figures, crossed the Nullarbor Plain, and stopped in the ghost town of Cook. Then, on the 14th, we reached Adelaide - early in the day, but still a bit late, so we took only a flying coach tour of the city with limited opportunities for photography through rain-streaked coach windows. It looks like a pleasant sort of city, going purely by the central area, even if the statue of the founder has its back to visitors, and the local habit of laying claim to Don Bradman seems to lead to heckling if one mentions it anywhere else in Australia.

Later in the day, still running late, we had only a few minutes in the remote mining town of Broken Hill - just time to get a few photos from the station platform. Finally, on the 15th, we descended from the Blue Mountains (nice views) through small town like Medlow Bath, into Sydney, from where we were set to drive down to visit family.

Yes, it was quite a trip
Posted by Phil Masters at 12:51 pm No comments: