Theatre, In Brief: In the Open, Come from Verona, Twice

Just by way of a diary note for my personal records, really...

We finally got our dose of Cambridge open-air Shakespeare for the year recently, twice. On the 17th of this month, we saw the Cambridge Shakespeare Festival production of The Two Gentlemen of Verona in Robinson College gardens. I honestly don't think I've seen a live performance of this one before, and while it was fun, I guess that I can see why not. I can quite believe that this was Shakespeare's first play (as seems to be the current academic best guess); it felt like a sketch towards his later comedy career, or somebody trying to emulate a Shakespeare comedy and not getting it quite right. The production pushed for some broad comedy with the outlaws (all female in this production, presumably purely for practical casting reasons), which didn't quite come off for me. Still, even in early, weak Shakespeare, you can suddenly get a jewel like "Who is Silvia? What is she/That all our swains commend her?" dropping in.

The prototypical nature of Two Gentlemen extends to its having a character action towards the end that probably looked a bit off even when it was written, and is likely to annihilate modern audience sympathies for the character involved entirely. Talking of which... The second part of this accidental duo was The Taming of the Shrew, courtesy of the Globe Theatre company on tour, in the Master's Garden at Corpus Christi (a bit of Cambridge architecture I'd not got into before, come to think of it), on the 23rd of the month. I'd not looked at any reviews of this beforehand, so I didn't know it was going to be an all-female cast in vaguely 1920s costume. Which actually worked rather well, especially for Petruchio, who ended up as a rather dashing roaring girl type in a pilot's coat.

But the casting and costumes didn't really address the modern problem of Kate's last speech. That was handled by having her deliver it 100% straight, but then looking at the male characters' reactions, especially Petruchio's. This turned the end of that scene into a big oops, damn moment, as it seemed to dawn on him and that others that he might have gone too far there. He'd really rather liked the untamed Kate, one felt, and now he'd lost that. From then on, everyone delivered their lines hesitantly, going through the motions and giving the play a complete downer ending. Which is probably as good a solution to that issue as any. 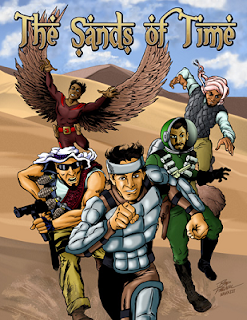 Some time back in the mid '90s - I've lost track exactly when, and my records don't extend quite that far back, but it would have been around 1995-6 - Atlas Games were publishing material for Hero Games's Champions RPG under license, and I sold them on the idea of a scenario book called The Sands of Time. I put a manuscript together and off it went ... and after a little while, the project fell victim to the collectible card game-powered chaos of the period, as that license deal faded out.

It happens. It's wouldn't have been the only project in my history to have died on me after too much work had been done. However, this one happened to have been assigned an editor, Spike Jones, who not only stayed in the business, but kept getting Champions-related editing jobs, and kept faith in the book, and sometimes brought it to the attention of other companies for whom he was doing work. Well, it didn't cost me any significant extra work.

Hence, in late 1997, the project was with Gold Rush Games, and was being reworked into their San Angelo setting/world. In fact, by 1999 it was edited and heading for layout - if only they could find someone with the time to do that job. It was supposed to be published in 2001, but then Gold Rush sold the rights to San Angelo to Hero Games. Sands should have gone with that ... but in 2002, the rights to San Angelo stuff went back to Gold Rush Games, who ended up using the setting with a completely different rule-set, and Sands fell through the cracks again.

So I was pleasantly surprised in 2010 when I heard from Blackwyrm Games that Spike had been talking to them. Of course, by then, the Champions rules were two full editions on from where they'd been when I wrote Sands, but they were prepared to get somebody else to do something about that - and for that matter, about updating the geopolitical background details. But that took a while...

Getting on for three years, in fact. But The Sands of Time is now, actually out - at least seventeen years after I wrote it. I don't know if that's any sort of industry record - I doubt it - but, well, there may be gamers who'll buy and run it who weren't even born when I wrote it. And it's certainly a personal record. Anyway, thanks and congratulations to Blackwyrm for finally getting this out the door.

Now we just have to sell it.

(Footnote to this: digging through my computer files, I realise that the date stamps on my first draft word processor files for this book go back to 1994, or in some cases late 1993. So it didn't quite make twenty years from first draft to print, but darned close. Come to think of it, I'm not sure that the scenario wasn't originally written for Hero Games, before being offered to Atlas...)
Posted by Phil Masters at 7:45 pm 1 comment: