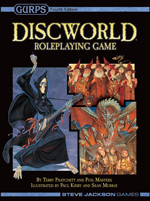 Yes, it's been a while since I've had anything to announce here. Various projects have, shall we say politely, been hanging fire. But now, after a year or two in the writing, some time in the revision (in which time, Terry added a whole new and significant sapient race to the setting), the horribly sad death of the setting's actual creator, and a heck of a period, umm, heaven knows, maybe with the book buried in peat maturing while SJGames cranked out a few dozen more Munchkin variants, I can actually, officially, mention the forthcoming onset of the new edition of the Discworld Roleplaying Game.

It's scheduled for November, in fact. I very much hope that remains true, because it'd be nice to do some kind of quasi-official launch at Dragonmeet.

(I'm honestly trying not to be cynical about launch dates these days, y'know, but it's difficult.)

Anyway, we definitely have an official cover design now an' all. I must come up with at least one more convention demo scenario...
Posted by Phil Masters at 11:35 am No comments: